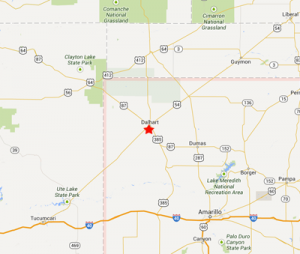 The Ports to Plains initiative that encompasses U.S. Highway 87 through Dalhart will provide smooth transportation from the border of Mexico (near Laredo) to Denver, Colorado and points north, eventually including Canada and the Pacific Northwest.

The Dalhart Municipal Airport is located three miles southwest of Dalhart. This former Army air base serves the public with facilities for commercial and private aircraft. Two lighted 75-foot-wide runways measuring 6,400 and 5,669 feet in length make travel easy and comfortable.

The Dalhart airport’s history began in 1942 when the Dalhart Army Air Field opened on 3,000 acres. The Air Base was closed in 1946 and the property was handed over to the city of Dalhart, whereby it was converted into the Dalhart Municipal Airport.

Dalhart was built by the railroad and the industry remains a mainstay of the local economy. Burlington Northern Santa Fe and Union Pacific run through Dalhart. The first rail in Dalhart was laid on February 27, 1882 and was part of the former Fort Worth and Denver City Railway Company, now BNSF. Eventually the Rock Island Line crossed paths with the Fort Worth and Denver City Railway, and in 1901 Twist Junction was born, though no one liked the name. After combining the names of the two counties on which it was situated, the name Dalhart was chosen to replace Twist Junction. 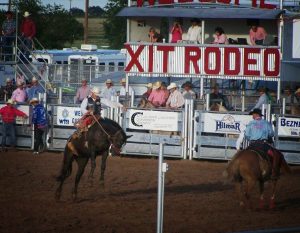 Although Dalhart celebrated its centennial in 2001, the history of the Panhandle dates back to 1885. The Texas Constitutional Convention set aside three million acres in hopes of building a new state capitol building. The acreage became known as the XIT Ranch. At one time it was the largest fenced ranch in the world – covering portions of ten counties.

In 1881, fire destroyed the state capitol building in Austin. The Texas Constitutional Convention bartered with Charles and John Farwell of Chicago to build the $5 million red granite Texas Capitol building in exchange for the three million-plus acres of the XIT Ranch. The Farwell brothers went into business with Taylor, Babcock and Company through association with a subcontractor and the pressure was on to rebuild the capitol building and develop the XIT Ranch. By the late 1800s, the XIT Ranch was running 150,000 head of cattle, with the XIT brand discouraging cattle rustlers as it was difficult to alter. 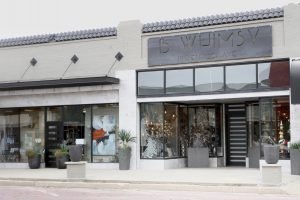 Dalhart grew quickly as a shipping center for the XIT Ranch and other area ranches. Even through the difficulties of the late 1930s when ferocious dust storms were prevalent, the people of the Panhandle did what they could when money was tight and food sparse – they even canned tumbleweeds! Cattle is still king in Dalhart, with several Cattle Feeding Operations making their way to the area in the 1970’s. This helped spur the growth of corn, wheat, milo, alfalfa and other crops to be produced in the area.

During the 1990s, Dalhart became the site of The Texas Department of Criminal Justice’s Dalhart Unit. It has the capacity to house 1,300 prisoners and is located outside of the city limits. Also during that time, Premium Standard Farms, a hog production facility that is now owned by Cargill Pork, came to the area. The 21st century has brought the ever-growing dairy industry as well as the location of the expansion facility of Hilmar Cheese in Dalhart.

Bringing Texline’s Past into the Future

Texline, located on U.S. Highway 87, 11 miles southeast of Clayton, New Mexico in western Dallam County, is named for its location on the Texas-New Mexico state line. It began when the Fort Worth and Denver City Railway purchased land from the Capitol Freehold Land and Investment Company and built a division point there for its line in 1888. By the end of that year, the town had a post office, hotel, depot and railroad shops. Charles F. Rudolph, editor of the Tascosa Pioneer, predicted that Texline would be “The wildest and the roughest and the toughest town of this section,” and for a time his prediction was right.

Texline served as the Dallam county seat from 1891 to 1903 when the county government was moved to Dalhart. The county’s first public school began in Texline about 1892. The town was incorporated in 1916, but removal of the railroad shops in 1923 caused its population to decrease to 385 by 1940. In 2010, Texline’s population was 507.

Out West in the Cowboys’ Land

Channing, the seat of Hartley County, is 30 miles south of Dalhart. Of all the Panhandle towns associated with the XIT Ranch, only Channing can truly claim that it developed directly from the enterprise. It derived its name from George Channing Rivers, paymaster of the railroad when it was built through the county in 1888. Channing was general headquarters of the XIT Ranch. In 1905 the local women’s club established a public library, one of the earliest in the Panhandle.

The XIT, which conducted much of its business from Channing, was the town’s chief customer until liquidation of the ranch in 1911. On September 6, 1931, a fire destroyed seven buildings in the business district. Nevertheless, by 1940 Channing had a population of 475 with a high school, three churches and five businesses, including a plant for grinding volcanic cinders and a cinder-block plant. Channing was incorporated in 1960 and grew as a shipping point and trade center for grain, feed and livestock. By 1984, mainly because of the accessibility of Dalhart and Amarillo by highways 87 and 385, the population had decreased to 304. In 2010, the population was 363.

Town with a Big Heart

Hartley is at the junction of U.S. highways 87 and 385, 14 miles southeast of Dalhart in east central Hartley County. It was named after the pioneer Texas attorneys Oliver Cromwell Hartley and his brother Rufus. It began as a tent village in 1888 after the Fort Worth and Denver City Railway purchased the right-of-way through the site. By the summer of 1890, a permanent town was platted, and a local school district established. When Hartley County was organized in 1891, Hartley was elected county seat and remained so until 1903 when another election made Channing the county seat. Despite threats from some local citizens, armed deputies and XIT Ranch cowboys managed to move the wooden frame courthouse, mounted on wheels, out of Hartley and into Channing. Nevertheless, Hartley continued to grow as the Hartley Townsite Company advertisements attracted prospective homesteaders and businesspeople. By 1910, Hartley had a hotel, school, and variety of stores and small businesses. The community had five businesses and a population of 150 in 1940 and was a shipping point for cattle and grain. Though Amarillo and Dalhart drew some Hartley residents in the 1930s and 1940s, Hartley had grown to a population of 370 by 1990, 441 by 2000, and 540 by 2010.

Source: The Handbook of Texas online